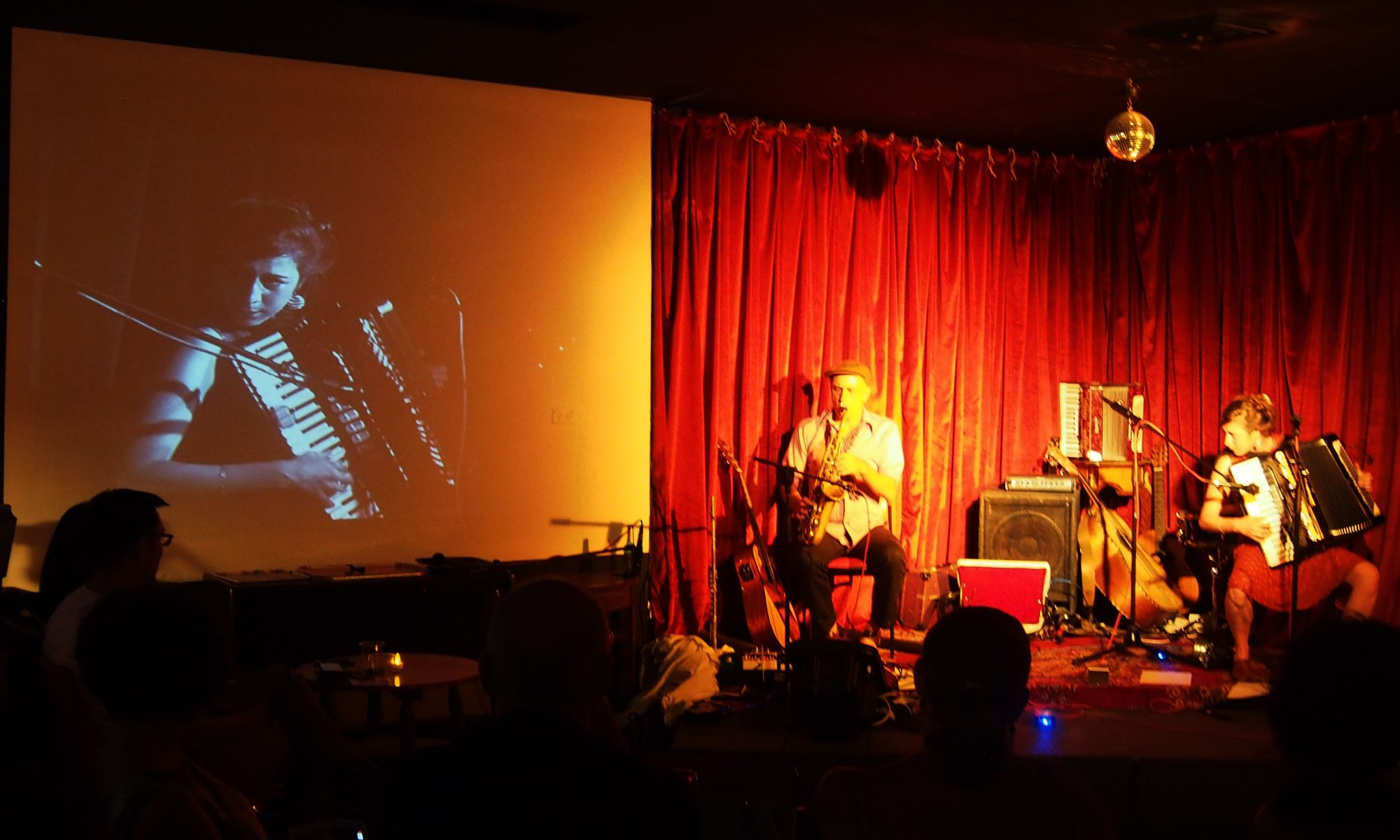 They are currently in Australia in January and February in 2015, starting at the famous Cygnet Folk Festival in Tasmania.

We invite you to join us, singer/accordionist/Folklorist Veronica Canale and Multi-instumentalist Trevor Brown, in to the serenely beautiful and strangely quirky world of Venezia and Beyond. Be inchanted by songs of intoxicated ghosts at the Venice Carnivale and mesmeric Sardinian lullabies, collected by Veronica in her travels and complemented by Trevor’s weird and wonderful arrangements.

A delightfully sumptuous collaboration between Italian singer, accordionist, folklorist and teacher, Veronica Canale, and Australian composer, performer , multi-instrumentalist Trevor Brown. Veronica specializes in collecting and performing the exquisitely quirky music of her home city, Venice , is also a virtuosic accordionist, researcher of Italian traditional songs and lullabies. She has also performed and collaborated with many international circus and theatre acts, as well as creating work for the Venice Biennale. Trevor, a virtuosic multi-instrumentalist and is a prolific composer and masterful improviser, lending his talents to an array of diverse projects around the country and the World, from circuses to symphonies , from Darwin to Dakar. His ability to blend classical /folk /electronic to experimental compliments the sometimes serene, other times strident or humorous music of Veronica.

Vero and Trevor shared a warehouse in in the grotty streets of Chippendale in Sydney 10 years ago and started playing together then, and they’ve furthered the project when Trevor has traveled to Italy, to play with her in some quintessentially crazy Italian festivals, in Venice, Lido and Abruzzo. In 2013 they toured to Istria in Croatia and in 2014 , are invited to Budapest to perform with some luminaries of the Hungarian folk and world music scene as well as touring Italy, Croatia, and France. 2014-15 will be Veronica’s first return to Australia since leaving in 2005 and whilst in Europe this year, they will tour and record a new album.

Veronica Maria Canale has studied classical piano at the Music Conservatory of Padova until 1999. She began then to study accordion with Franca Pampaloni and Miranda Cortes focusing on World music, in particular Klezmer, Tango and French traditional music. Since 2006 she has attended several workshops of traditional and contemporary music and in 2008 she attended the “National Course of Music Learning Theory” of E.E. Gordon. She started then to study singing with Letizia Fiorenza, investigating Italian traditional music thanks to several singers as Sandra Mangini and Giuseppina Casarin. She has performed in Lagunaria of Giovanni Dall’olivo and others many ensembles. She has collaborated in several theatre projects ( with Ricardo Bartìs in Biennale Teatro di Venezia 2010, with Kalambur teatro and Pantakin, Venezia)

At the moment she is teaching music to kids with the Gordon’s approach in different locations. She performs as singer and accordeonist collaborating with diverse artists in theaters and puppet shows, according to her eclectic spirit.